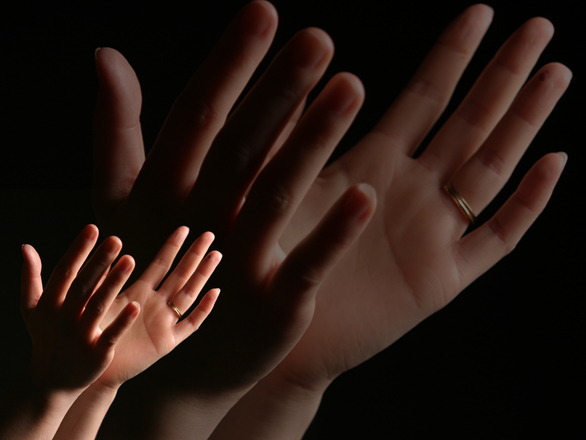 God does not talk to me.
I don’t pray about things, I think about them. For me the Holy Spirit is an abstract idea, someone who is mainly present in worship situations. I never raise my hands and I never pray together with others, standing in circles, out loud. On the contrary, I believe that I don’t have to pray about, or even pray for things because God will provide what is good for me and lead me on the best path anyway.

And then I came to the United States where everything is different.

God talks to my wife. Sometimes, she says, she can feel a “quickening” in her heart and she becomes very still and listens. She and all of her Christian friends pray about things before they make a decision. On Sundays they are so moved by the Holy Spirit, they often raise their hands in worship. They call each other brothers and sisters and stand in circles to pray together… out loud.

Am I less religious than my wife?

I don’t think so. I feel a deep love for God and I trust God’s love for me. I trust that God sees me as someone beautiful and wonderful. Someone with a purpose in this world. Just like my wife does. Yet when I came to the United States our expressions of faith were so completely different that I experienced a true culture shock. All that noise in the church that was so hard to bear for me, was for her just an expression of worship, of love. Praying over someone for healing was for me just magical thinking while for her it is a valid expression of her faith and trust in God.
When I researched Pentecostals on the internet I soon heard the term “spiritual warfare” for the first time and I smiled. Yes, the first time I heard it I smiled because I was absolutely certain that the person who said it was joking. Well, of course they were not. And so I felt superior to these backwards Americans who believe in evil spirits and possession, who drive out demons.

My faith is rational. I though that because in my tradition people had reduced God to love alone and minimized His interference on Earth for the sake of the absolute free will of us humans, my faith was further advanced than the one I encountered here in the States. Maybe I even thought for a moment that mine was better because it seemed to be less harmful to those who did not fit into the categories that American Christianity seemed to promote. LGBT people were, in my eyes, the obvious victims of such a backwards faith, whereas I, in my tradition, grew up with a gay pastor.

But of course as a good partner I was ready to give these so very alien expressions of Christianity a shot. So I began to join those circles and listened to the prayers they said. I watched people being moved during services and listened to stories of miracles. And while I did all that with a certain inner distance, I began to wonder how these educated and rational people can stick to such a backwards faith. Suddenly I had to admit to myself: Maybe I was missing something.

I started a monthly contemplative prayer at church: short songs that are repeated dozens of times, periods of silence and no pastor involved whatsoever. It was the exact opposite of what this community knew. But they came. And more often than not I heard that they enjoy it. Enjoyed the silence and the peace that this kind of worship offers. HA!, I thought, I’m giving them something they lack.

But what if they were just open to something new and realized it was good for them? Why were they able to do it and I wasn’t? Was I in all my openness really just horribly backwards in my feelings of superiority? Who am I to decide what is the right way to worship God, or what God’s interference and participation in this world look like? Who am I to declare a “better” expression of faith only because mine is more familiar to me?

And then, one Thursday morning when I read about yet another “Religious Freedom Law” I saw myself. I saw myself among those who believe that their way is the only truth, who ridicule whatever is not part of their tradition, their expression of worship. I saw myself among those who deny what they don’t understand and condemn others for a diversity they themselves cannot see as beautiful. And I cried. I cried because even although I did not intend to use my personal interpretation of Christianity to make life harder for others, I was nevertheless on the same path. A path full of prejudices, fear of the unknown and a very comfortable feeling of spiritual superiority. What a shock to see myself in those who keep hurting my LGBT siblings.

My wife calls them the different languages of worship. The catholic language, the evangelical language, the progressive language, the Southern Baptist language and so on. There are so many – we cannot possibly understand, or even attempt to learn them all.
Like Babel. Yes, that was what her words reminded me of. So many expressions of faith, so many “truths” are out there that we do not understand each other anymore, even although we call ourselves Christians.

So what to do? Well… don’t we all remember the story from Acts 2 when the Holy Spirit came at Pentecost and took away all the misunderstandings, the mixture of languages, all the very literal babel? Shouldn’t we as people of the Holy Spirit be able to understand our fellow Christians in their worship and their “truths”? Doesn’t the Holy Spirit enable us to find the one common language in all the chaos and listen to that instead of focusing on the differences?
Yes, love your neighbor… but doesn’t that also mean, listen to your neighbor? Listen to what you do not understand, listen to what hurts you, listen to what scares you because in the end this is where understanding and healing for all sides begins.
Ask and it will be given? Yes.
So what about this?:
Listen and you will understand!
Listen and you will be understood!